Is there a place hosting many and many examples of the most different forms of art? Yes, there is one, and its name is the Vatican Museums. The Vatican Museums contain the majority of masterpieces produced by Roman, Egyptian, Etruscan, Renaissance and contemporary art. An enchanting spectacle for the eyes and the mind, culminating in the visit to the Sistine Chapel, the masterpiece by Michelangelo Buonarroti. 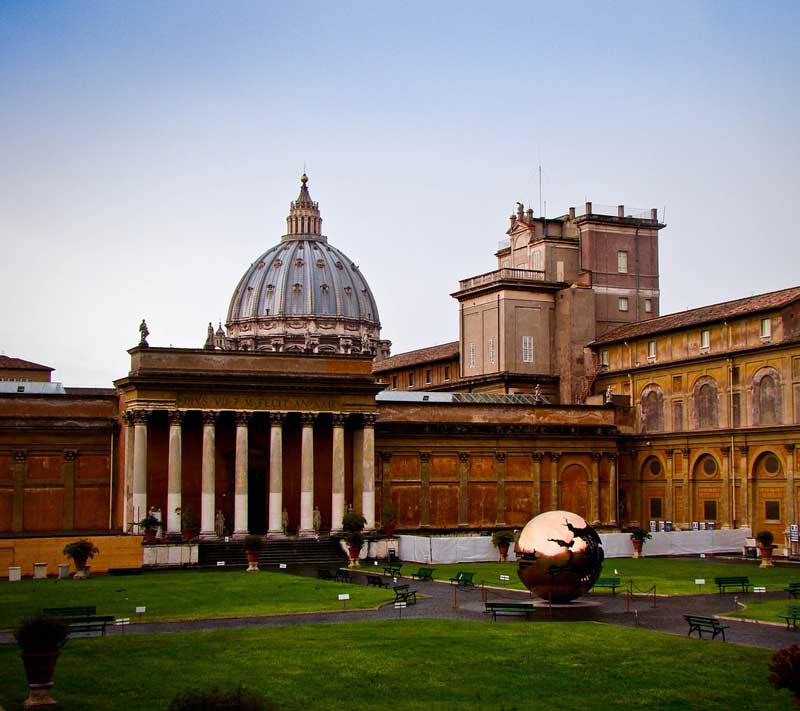 Start times: 9am or 1.30pm except Sundays and bank holidays. On Wednesdays we suggest booking the tour in the afternoon since the St. Peter's Basilica is closed in the morning due to the Papal Audience.

Useful info: On special occasions such as official visits, holidays, beatifications, etc., Saint Peter's Basilica or the Sistine chapel may close without prior notice. If this happens, the tour will not be cancelled and you will spend more time inside the Vatican museums with your private guide. Visitors should wear clothes that are suitable for the place we are going to visit, with their shoulders and knees always covered. No umbrellas or large handbags are allowed. Water bottles and snacks may be bought inside the museum. It is possible to take pictures, with the exception of the Sistine Chapel. We recommend wearing comfortable shoes and clothes that are suitable to the weather.

The present day Basilica stands over the original Constantinian church, whose building started in 320 AD after order of emperor Constantine on the grave of Apostle Peter, martyrized between 64 and 67 AD near the Circus of Nero. The Constantinian basilica was consecrated in 326 and completed in 349 AD. The first renovation works of the building were ordered by Pope Nicholas V and by Leon Battista Alberti. The complete rebuilding of the Basilica was decided by Julius II, who entrusted Donato Bramante with the project; when they both died the project passed into the hands of Raphael and Giuliano da Sangallo, and then to Peruzzi, Antonio da Sangallo and Michelangelo.

When Michelangelo Buonarroti died, his place was taken by Vignola and Ligorio, and later on by Giacomo della Porta and Fontana. Maderno also worked for this project under Pope Paul V, then followed by Bernini who added belfries to the project. Only one bell tower was built and then promptly demolished.

The Vatican Museums still host an invaluable artistic heritage. The art collection started during the Renaissance and after the Counter-Reformation it was increased and rearranged during the 18th and 19th centuries. The idea of using the Vatican premises as a museum is due to Clement XIV and Pius VI, the two Popes after whom the Museo Pio Clementino is named nowadays; Pope Pius VII ordered the building, after Stern’s project, of the Braccio Nuovo (New Wing); Gregory XVI created the Egyptian and Etruscan sections; Leo XIII ordered the renovation and subsequent opening of the Borgia apartment, while Pius XI ordered the building of the monumental entrance. Going up Sixtus V staircase, visitors arrive into the probably most famous room of Christianity, hosting the conclave and several ultra famous wall paintings: the Sistine Chapel.

Built by Baccio Pontelli during Sixtus IV papacy, it was divided into two by a marble barrier made by Mino da Fiesole, Andrea Bregno and Giovanni Dalmata. From 1979 to 1999 the works of art have undergone a series of cleaning works. Paintings are divided into two cycles, one dating back to the 15th century and ordered by Pope Sixtus IV and Francesco della Rovere, and the other one dating back to the 16th century, ordered by Julius II and carried out by Michelangelo Buonarroti, while the altar wall is decorated with the very famous Last Judgment, by Buonarroti too, and carried out 25 years after the completion of the frescoes painted on the ceiling.